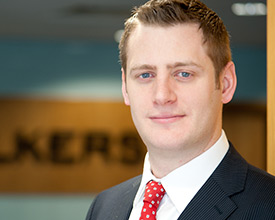 James is a Jersey Advocate with more than a decade's experience as a Jersey litigation lawyer, specialising in contentious trusts matters and commercial disputes.

He is a Senior Counsel in Walkers' Jersey Insolvency & Dispute Resolution Practice Group, acting mainly on complex trust and cross-border commercial disputes, including on cases that have gone before the Privy Council.

Having trained with a Magic Circle firm in London, he moved offshore in 2009 and has worked with Walkers Jersey Insolvency & Dispute Resolution team since early 2011.

His recent work highlights include:

Sheyko v Consolidated Minerals Limited – leading a team including associates, barristers and paralegals on a vast ediscovery exercise involving more than 19 million documents in English and Chinese, appearing at the related procedural hearings and liaising with colleagues in Hong Kong in relation to the case.

The Federal Republic of Brazil and other v Durant Corporation and another – James assisted with this case which was determined by the Privy Council and gave rise to a landmark judgment on the availability of backwards tracing.

Walker and others v Egerton-Vernon and others – James was part of the team working on this high value case which involved a breach of trust claim and in which the Royal Court determined the principles of empêchement and prescription in respect of claims brought by a trustee of a Jersey trust.

Tepe Insaat Sanayii SA v Boru Hatlari lle Petrol Tasima AS and others - This case has produced landmark judgments on the principles of sovereign immunity in respect of State-owned shareholdings and the court's jurisdiction to arrest assets situated outside its jurisdiction in the Royal Court and on appeal to the Court of Appeal and Privy Council.

James trained with Allen & Overy LLP and spent time in the firm's Litigation Department as part of the Trust, Asset Tracing and Fraud team working closely with the partner heading that team.

James gained experience of a range of litigation matters, including particularly trusts disputes, at a large Channel Islands firm before joining Walkers.

He has acted on some of the highest value and most complex cases before the Jersey courts during his time with Walkers.

Admitted In:
England and Wales (not practising)
Jersey

2021 Legal 500 - Dispute Resolution - Rising Star - "Switched on, all over the detail, very good instincts and a highly capable lawyer."

"Routinely praised by clients for his expertise in trust, fraud and commercial litigation"

"Excellent strategist, sees the big picture, and impressive on the law."