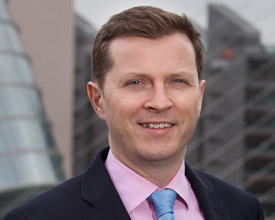 Garry Ferguson is the managing partner of Walkers' Ireland office where he is a finance partner heading the firm's Finance and Capital Markets team. Garry has many years’ experience practising as a financial services lawyer. He has acted for a wide range of international financial institutions, investment banks, arrangers, managers, agents, trustees, private equity groups and hedge fund managers.

He has acted as lead counsel, issuer counsel and trustee counsel on a wide variety of capital markets transactions including all types of CLOs, CDOs, ABS and MBS deals, insurance linked securities (CAT bonds and sidecar transactions), ABCP Programmes and Russian originated deals.

He has advised on and structured a wide variety of distressed asset acquisitions and fund financing structures.

Garry also advises on general banking, secured and unsecured lending and regulatory matters and has substantial experience in the areas of restructuring, work-out and enforcement of stressed and defaulted deals.

Prior to joining Walkers, Garry worked with a big five law firm in Dublin for almost 6 years where he was a partner in that firm’s structured finance and derivatives group.  Prior to that, Garry was a financial services taxation manager in one of the big four accountancy practices.​

2019 Chambers Global Guide - Notable Practitioner (Capital Markets: Debt) - "One interviewee describes him as "commercially minded and very responsive," while another adds that Ferguson is "enthusiastic and really effective."

2016 - Chambers Global - Garry Ferguson is head of the group and advises clients on all areas of capital markets transactions and products. Sources appreciate his "technical expertise, practicality and results-oriented approach."

Garry is recommended in Chambers and Partners, Legal 500, IFLR 1000 and Who's Who of Capital Markets and he has advised on and structured several award winning deals in his specialist areas.

He is also widely published in the areas of securitisation, structured products, capital markets and taxation and is frequently asked to contribute to articles in these areas.

Garry was for several years a lecturer and a tutor in the Law Society of Ireland on company law, financial services and on principles of securitisation.​​

Member of the Incorporated Law Society of Ireland

Garry Ferguson is head of the group and advises clients on all areas of capital markets transactions and products. Sources appreciate his "technical expertise, practicality and results-oriented approach."