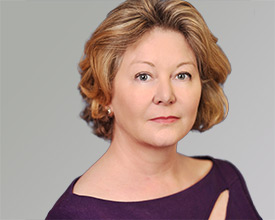 Rosalind Nicholson is a partner in Walkers' Insolvency & Dispute Resolution Group. She is based in the British Virgin Islands office.

Rosalind specialises in corporate litigation and related advice on strategy, risk management & issues of corporate governance with particular focus on shareholder & boardroom disputes, contested takeovers, and contentious & non-contentious restructuring. Her practice extends to all areas of company law in which a litigation risk, or the need for an application to the Court, may arise.

Rosalind was called to the Bar in England and Wales in 1987 and practiced as a barrister for over 20 years at 4 Stone Buildings, Lincoln's Inn specialising in company law, corporate finance, corporate litigation and contentious and non-contentious restructuring. Rosalind moved offshore in 2012 and worked as a barrister in the litigation department of another leading BVI firm before her appointment as a partner of Walkers in April 2016.

2019 Chambers Global Guide - Notable Practitioner (Dispute Resolution) - "A source praised her as "very strong indeed - a good litigator and good company lawyer." Another commentator went further, lauding her as "one of strongest company lawyers in the jurisdiction."

"Rosalind Nicholson is 'an excellent litigator who does quality work' "

2018 Chambers Global Guide - (Dispute Resolution) A Notable Practitioner. "Excellent litigator; her opinions and arguments hold a lot of weight." Another source praised her as a "person of real quality."

2017 Chambers Global Guide – (Dispute Resolution) A Notable Practitioner. "She [Rosalind] is well regarded by interviewees, who agree she is 'a very high-quality litigator'."

2012 Chambers & Partners - "A creative problem solver who is as commercial in her approach as she possibly could be."

2011 Chambers & Partners - “Whether working on corporate transactions or in the midst of company litigation, she has shown herself to be capable, receptive and a pleasure to deal with.”

Rosalind was recommended by both Chambers UK and the Legal 500 for many years for her expertise in Company Law.

Rosalind is the author of the following publications:

Rosalind is also a regular contributor to leading industry news sources including, but not limited to, the below:

Rosalind is a Member of the Chartered Institute of Arbitrators and an Accredited Mediator.

"A creative problem solver who is as commercial in her approach as she possibly could be."