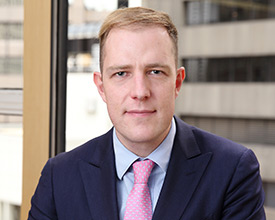 In addition to his extensive litigation experience in Bermuda's Courts, Benjamin provides general advice in connection with the financial and operational restructuring of both private and listed companies, with a particular focus on provisional liquidations and schemes of arrangement.

Benjamin is a senior associate in Walkers' Insolvency, Restructuring and Dispute Resolution practice, and is based in Walkers' Bermuda office

Benjamin spent five years working in the Banking, Restructuring and Insolvency team of Henry Davis York (now Norton Rose Fulbright) in Sydney, during which time he advised financial institutions, insolvency practitioners and secured lenders and creditors on a number of high-profile litigious matters, including many with cross-border elements. From 2014 to 2016, Benjamin worked as an associate at a specialist insolvency litigation practice in Hong Kong, principally focused on the conduct of a claim against the directors of a Guernsey-incorporated, Amsterdam-listed $22 billion mortgage fund in the Royal Court of Guernsey, believed to be the single largest trial conducted in the Commonwealth during 2016.

Benjamin joined Walkers in Hong Kong in 2016, where he advised on a broad range of disputes involving companies listed on the NYSE, NASDAQ, SEHK and SGX and incorporated variously in Bermuda, the Cayman Islands and British Virgin Islands, before joining Walkers in Bermuda in February 2018.