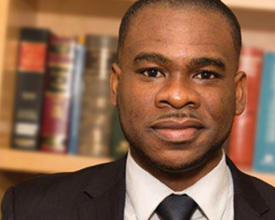 Renell Benjamin is based in the BVI office where he is an associate in the Insolvency & Dispute Resolution Group. He joined Walkers in 2015 as an articled clerk and successfully completed his Articles in 2017.

Since qualifying, Renell has developed a variety of commercial practices such as shareholder disputes, freezing injunctions, appointment and remuneration of liquidators, liquidation of companies on a just and equitable ground and a host of other commercial litigation and insolvency litigation matters.

He regularly appears before the Commercial Court of the British Virgin Islands and the Eastern Caribbean Supreme Court of Appeal and has worked closely with international legal teams on matters that go before the Privy Council.

2020 Legal 500 - Recommended - Dispute Resolution - "Renell Benjamin is highly recommended. As a local, he knows all the ins and outs of the BVI legal scene."

Renell was the recipient of the Law Specialist Clinic Award from the Eugene Dupuch Law School for his outstanding performance.

Renell is a member of the BVI Bar Association and the Restructuring and Insolvency Specialists Association (RISA) in the BVI.

"As a local, he knows all the ins and outs of the BVI legal scene."