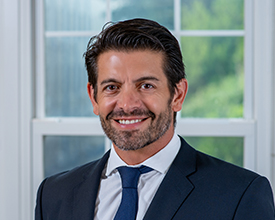 Peter Dunlop is a partner* and Co-Lead of the Insurance & Reinsurance team of Walkers Bermuda.

Peter is a former underwriter and his insurance practice includes non-contentious and corporate advice in the areas of insurance company, Managing General Agency, captive and SPI formations, licencing, ILS structures, policy and contract drafting, new product advice and insurtech in which he has acted for investors, fund and captive managers, insurtech start-ups, brokers and many of the world's leading re/insurers.

He is also an experienced advocate, a Fellow of the Chartered Institute of Arbitrators and has many years' experience of complex international re/insurance arbitrations in the UK and Bermuda for policyholders, cedants and reinsurers across a broad range of industries, including banking, energy, healthcare and pharmaceuticals. Peter also has significant experience of complex and long-running insurance regulatory investigations in the UK and in Bermuda, representing insurers and reinsurers in investigations often with a multi-jurisdictional dimension.

*The title of "partner" is used to refer to an employee of Walkers (Bermuda) Limited with equivalent standing and qualifications.

Peter has over 24 years' combined experience of legal practice in London and Bermuda.

He is a Chartered Property & Casualty Underwriter and spent nearly five years at XL Catlin Bermuda, where he was part of a specialist team that created a pioneering portfolio of innovative re/insurance business in the areas of transactional liability, litigation risk containment & ATE, contingency, structured credit, tax ring-fencing and alternative risk transfer.

He also spent six months on secondment to Gen Re UK in London in 2006 in relation to the FSA's investigation in to finite reinsurance practices.

For Lloyd’s Syndicate 957 in English litigation against its XOL reinsurer, ING Re, arising from non-payment of indemnity under PA and Premium Protection Lineslips [2005].

In the Liquidation of PDVIC (ongoing) – for US oil company CITGO in insolvency of its Venezuelan parent’s Bermuda captive insurer, PDVIC, arising from $200m+ casualty reinsurance claim.

For captive of US pharmaceutical company in Bermuda arbitration against international reinsurers arising from mis-selling of US-produced anti-bipolar drug [2007].

For insured against media insurer arising from alleged fraudulent misrepresentation – acting as advocate in week-long hearing [2020].

For assignee of D&O claims against management liability insurers of large US law firm in bankruptcy [2022].

Peter is a regular contributor to legal and business publications and has published articles in Bermuda Re: ILS, Insurance Insider, Trading Risk, Global Reinsurance, Getting The Deal Through, The Review – Worldwide Reinsurance, Inside Fac and Global Annual Review of the Americas. He was also a contributor to O'Neill & Woloniecki's "The Law of Reinsurance" (3rd. Edition, Sweet & Maxwell).

Peter is also a regular speaker at Bermuda and international conferences and roundtables.

2022 Chambers Global - Notable Practitioner - Insurance - "He is very knowledgeable and responsive. He knows what's going on and provides solid advice."

2022 Legal 500 - Leading Individual - Insurance & Reinsurance - "Would highly recommend Peter Dunlop. He gets to the point, is commercial in approach and delivers" and "Peter Dunlop is well connected in the industry and has his pulse on regulatory and commercials and displays an ability to provide commercial advice to complicated matters." and "Both Peter Dunlop and Melanie Fullerton are stand-out lawyers, and legal representatives in the industry on island. They have an unwavering commitment, and own the work/projects as if it was 100% their stake. They are always available for questions and they process our needs almost immediately."

2021 Who's Who Legal - Recommended - Insurance & Reinsurance - 'Respondents consider Peter Dunlop to be “extremely knowledgeable” in non-contentious issues ranging from contract drafting to insurtech.'

Peter is a member of the Bermuda Bar Association, CPCU (Bermuda Chapter), Law Society of England & Wales and INSOL. He sits on a number of advisory groups, including the Bermuda Business Development Agency's Insurtech Working Group and the Bermuda Monetary Authority's ILS Taskforce. Peter is also a Fellow of the Chartered Institute of Arbitrators.

Peter Dunlop is well connected in the industry and has his pulse on regulatory and commercials and displays an ability to provide commercial advice to complicated matters."

'...highly knowledgeable, very good sense of the strategy and reasonable counsel. Always try to make himself available despite the workload. Efficient. Great ability to clearly explain complex files and procedures.’

He has a "good local knowledge [and] is responsive and commercially minded."

"An exceptional insurance lawyer with diverse experience and a practical approach to matters."