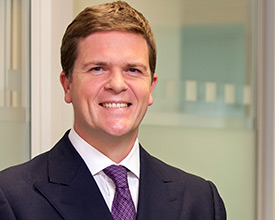 Robert joined Walkers in 2013 having spent six years in the British Virgin Islands practising as a barrister, and is a partner in the firm's Global Insolvency & Dispute Resolution Group. Robert heads up the IDR department in Walkers' Singapore office. He specialises in contentious corporate, finance, funds, commercial and trusts disputes and contentious and non-contentious insolvency and restructuring matters, including schemes and of arrangement, shareholder disputes, regulatory disputes, contentious trusts and probate disputes and applications for disclosure orders and urgent injunctive relief.

Robert is registered as a registered lawyer by the Singapore International Commercial Court.

Robert has specialised in corporate, commercial, insolvency and trusts disputes since 2001. He has regularly appeared as an advocate in the first instance and appeal Courts of England and Wales and the British Virgin Islands.

2015 Chambers Asia-Pacific – Ranked Lawyer – Band 1, Offshore: Dispute Resolution, Asia-Pacific Region – "Robert Foote is recognised by the market as a 'very capable and skilled' corporate and insolvency litigator. He has a wealth of experience in acting in BVI courts, and has an in-depth knowledge of the jurisdiction."

2014 Who's Who Legal 100 – Asset Recovery and Insolvency & Restructuring - "Robert Foote joined the firm’s Singapore office in 2013 as senior counsel and is an 'excellent adviser' on insolvency, restructuring and asset recovery matters."

2013 Who's Who Legal – Asset Recovery: "Robert Foote is the 'go-to' lawyer for urgent injunctive relief in Singapore."

2013 Chambers & Partners Global – Robert Foote is a well-respected practitioner who "is brilliant, has great client management skills and attention to detail and keeps completely up to speed," according to sources.

"Robert is an excellent lawyer, and a go-to for offshore disputes. He is highly hands-on, responsive and adept at distilling key issues in complex situations. His ability to formulate strategic and practical advice with high efficiency is a true gem"