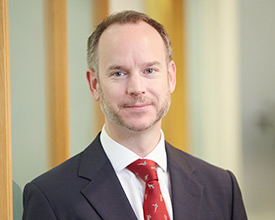 Daniel also advises on the offshore elements to disputes and insolvency matters relating to crypto-currency and digital assets.

He has been in private practice since 2013 and has practised offshore – mostly in the Cayman Islands – since February 2017, and is admitted in both the BVI and Cayman.

He also advises on contentious and non-contentious insolvency matters.

Daniel practised with another offshore law firm in the Cayman Islands – including a short secondment in the firm's Jersey office – before joining Walkers' London office in September 2021.

He trained with Herbert Smith Freehills, and then practised at boutique firm Signature Litigation for three and a half years, where his experience included both High Court and Court of Appeal litigation and international arbitration, before moving offshore.

Prior to qualifying as a Solicitor, Daniel worked as a Private Equity Associate with Deloitte, and as an M&A Manager with Lloyds Banking Group.

Daniel also sits as a magistrate in north London and on appeals at Blackfriars Crown Court.

England and Wales (not practising)