From our vantage point as advisers to many of the world’s top investment fund managers and financial institutions, broad market forces flow through to our instructions, and ultimately drive many of the terms of the funds we advise.

In this four-part series we look at the current themes we have noticed in the investment funds market. Parts one (here) and two (here) focus on Hedge Funds and parts three (here) and four explore Private Equity.

All data, unless referenced, is taken from Walkers' in-house investment funds survey.

FUND GEOGRAPHIES
North America and Asia remain the most significant target regions for investments, but we have seen an increase in global geographical strategies. Industry/sector rather than geographical location is becoming the key driver for funds operating in increasing globalized asset markets. 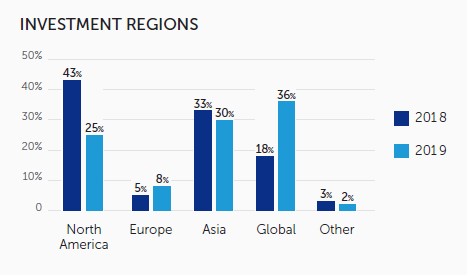 Outside of Asia it has been a quieter year for emerging market funds. There has been a small increase in activity in Europe, with managers perhaps either seeing opportunities being caused by Brexit or hoping that the end of that circuitous process may finally be in sight.

FUND DURATION
One trend that has been evident from the data over the last couple of years is a lengthening of fund terms. While this year has seen a dip in the >10 year bracket, 8-10 years remains the most common term, with slightly shorter 5-7 year terms continuing to be popular in Asia.

The reduction in the >10 year terms may be a consequence of the negotiation of materially more flexible extension terms into partnership agreements. The ability for the GP, with or without LPAC consent, to extend by one to three years remains common, but a deeper dive into the partnership agreements suggests a surge of funds which have built-in provisions allowing them to extend by one-year periods for an indefinite number of years, subject to obtaining the agreed level of limited partner consent.

The willingness of investors to remain locked in for longer is also reflected by the increased number of evergreen or permanent capital private equity funds in the market.

Investors therefore appear to accept that sourcing and executing the best investments, at acceptable prices, takes time. This acceptance is also reflected in a continued widening of the investment periods of funds.

In addition, with end-of-life GP-led restructurings arising more and more frequently, some partnership agreements include provisions which seek to set out a framework for any such transactions which may arise, hardwiring in approval mechanisms such as LPAC consent and third party valuations. The esoteric nature of each of these transactions means that it is not possible to draw distinctive conclusions from these provisions, although they may indicate that managers anticipate such restructurings, and the secondaries market generally, will remain active in the future.

It is clear that the marketplace for portfolio investments is incredibly competitive. In this environment, investors are willing to allow managers a little more time to find and close high return investments to generate the portfolio returns that they expect.

FEES
The “two and twenty” standard remains broadly intact, subject as always to side letter pressure. There are, however, some interesting developments which we are seeing more frequently.

20% remains by far the most common carried interest entitlement percentage, albeit there is some activity on either side of that mark. The more interesting story however lies in the distribution waterfalls in partnership agreements, with more GPs earning the right to earn 20%+ carry in the event certain performance hurdles are met. This can often be accompanied by a corresponding increase in preferred return or discount to management fees, suggesting that certain managers are sufficiently confident in future performance to forego guaranteed amounts at earlier stages in the hope or expectation of “super carry” as they approach the end of life of their funds.

Management fees have remained at around the 2% mark albeit with some upwards deviation, perhaps reflecting the increased regulatory burden and costs on managers. 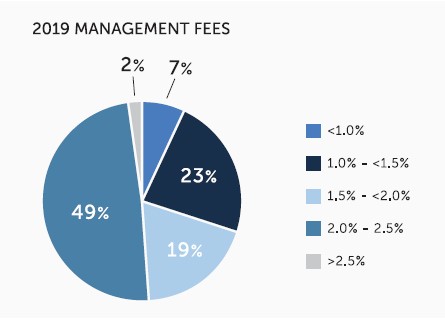 In general, therefore, while “two and twenty” is still dominant, we are seeing investors and managers continuing to work together to create performance-based reward strategies designed to more closely align their interests.