From our vantage point as advisers to many of the world’s top private equity houses, broad market forces flow through to our instructions, and ultimately drive many of the terms of the funds we advise.

In this series we take a look at what we have been seeing in the investment funds world. Part six will focus on private equity funds.

Whilst North America continues to represent the most dominant geographical strategy, with investors drawn to its developed, secure economies, there has been a notable increase in emerging markets focussed fund launches, with the Asian market in particular performing strongly.

European focussed strategies by contrast have been less active, a possible consequence of volatile macro events such as the Brexit vote. In general we continue to see funds with global geographical strategies, limited rather by focus on particular asset classes such as technology.

Whilst Cayman vehicles which are feeder funds remain invested primarily in master funds domiciled in Delaware, this year has seen them act as feeders into master funds located in China and Singapore. As the number of master funds domiciled in Asian jurisdictions increases it should be noted that we continue to see Cayman vehicles feeding into, or investing in parallel to, such funds, with investor familiarity with and demand for Cayman access points to such fund structures remaining strong. 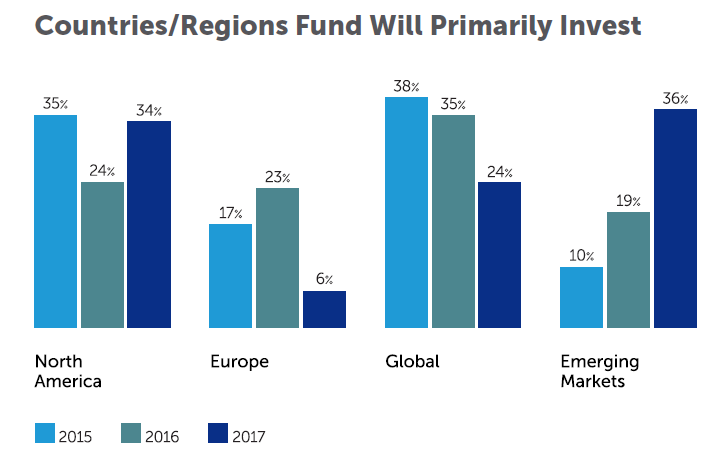 Fund terms are typically running to ten years for funds focussed on buyouts, real estate, energy or infrastructure, shortening to five to seven years for credit funds. Alongside provisions allowing specific powers to extend by one to three consecutive one year periods, which have come on market in recent years, we are also seeing a definite trend towards funds being able, with limited partner consent, to extend their term for further multiple one year periods, following expiration of the prescribed extension periods. This reflects a balancing of the needs of investors to have certainty as to the amount of time for which their capital is required to be locked up with an understanding from both managers and investors that retaining flexibility to remain invested for longer periods than initially envisaged may be mutually beneficial in increasing final returns.

As funds raised in the 2003 to 2007 fund raising cycle come up against final term extensions, we are starting to see a significant rise in end-of-life restructurings and GP led secondary deals. Where, not too long ago, this would have involved a sell-off, and usually by a distressed seller, the presence of large secondary buyout funds and asset price recovery has led to a much wider range of transactions in this space, such as GP led transactions involving statutory mergers, tender offers and preferred equity deals. The flexibility of Cayman vehicles and merger rules have provided the tools to execute these transactions.