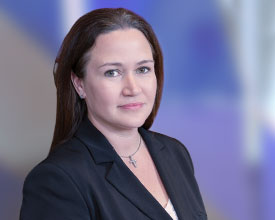 Advocate Sarah Brehaut has been appointed Bâtonnier of the Guernsey Bar. The Bâtonnier is the head of the Guernsey Bar and is elected by members of the Bar for a two-year period. The role carries wide responsibilities including dealing with complaints of professional misconduct, liaison with the States of Guernsey on legislative reform and managing the structure of professional training and qualifications.

She is an experienced court-going Advocate who frequently represents liquidators in respect of contentious and non-contentious matters before Guernsey's Royal Court in relation to compulsory and voluntary winding-up, and holds the BPP Certificate of Proficiency in Corporate Insolvency (for which she received the highest exam result in the country).

Sarah also advises and represents directors of regulated entities in respect of regulatory investigations and disputes.

She has significant experience in all aspects of commercial dispute as well as considerable experience of appearing in the Magistrate’s Court, Royal Court and Court of Appeal.

Sarah is recognised by Chambers UK, Legal 500 and Citywealth.

Sarah joined AO Hall, Walkers (Guernsey) LLP's predecessor firm in 2011 following an extensive career with the Guernsey Bar, commencing in 1996 when she first began working in the legal field.

Admitted In:
England and Wales (not practising)
Guernsey

2018 Bâtonnier of the Guernsey Bar

2017 Who's Who Legal - Investigations

Sarah was referred to by Sir John Grenfell Nutting Bt., QC in the Court of Appeal as making submissions in a “realistic and indeed persuasive way” and in a further case of conceding “in argument with the realism which we would have expected of her”. In the Royal Court of Guernsey, LB Marshall referred to Sarah’s submissions as "…ably, attractively and forcefully put".

Sarah is a Notary Public.

‘A formidable advocate and an expert in her field’